It’s been a while since I’ve done one of these deep dives in Ottoneu basketball category leagues and I needed a break from prepping for my football draft. So here’s a post that explores SGP for that format that might be useful to someone out there.

Specifically, this might be of interest to others who calculate their own auction values for category leagues or who are otherwise curious about the under-the-hood of scoring. Basically, I was curious what Standing Gain Points (SGP) looked like for Ottoneu basketball leagues last year for purposes of assigning values to players once projections are available.

Note that the empirical strategy was designed for season-long point leagues, not H2H. However, the correlations between the dollar values derived from the SGPs in the two formats is strong enough that I’d feel comfortable basing H2H values on them (or at least that’s my experience in H2H baseball leagues). For example, if Giannis is worth $120 in a hypothetical season-long category league, then he’ll be worth about $120 in a H2H as well.

Recall that there are 8 category leagues; however, I excluded one league because so many teams had low MP totals, which suggests that a majority of the league was not engaged throughout the season. This isn’t a dig at members of the league; I just want to be transparent regarding the data that was used and it didn’t make sense to comingle data from leagues where the inactivity was evidently quite high.

For counting stats, I assembled season-long totals for each league and then took the simple average across the 7 leagues. If you’re familiar with SGP, then you know that the calculations are much more straightforward with counting stats than percentage stats (see a few paragraphs down).

How would you calculate a SGP based on Giannis’ 55.3% FG%? There are two key data points from each player that are needed to calculate his SGP: his FGM and his FGA. This of course is analagous in baseball to needing to know his H and AB to figure out his marginal effect of a player on his team’s average.

You also need to know the league averages. So the first step is to figure out the FG% and FGA (less one full-time player) of the typical team in the typical league. I came up with 47.2% in 7,500 FGA (rounded to a nice even number), which implies 3,540 FGM per team across all league (less on full-time player).

The second step is to calculate the SGP factors as before: a bivariate regression to yield the slope. We need additional league data, so I’ll hold off on presenting those for the moment.

The SGP factors for the percentage statistics are:

Rotowire hasn’t published their 2022-23 projections, but I’m working with the 2021-22 actual game data via NatStat to try to come up with post hoc values for last season. Happy to post those if they’d be of interest to anyone. I won’t be able to share the values based on Rotowire projections since they’re paywalled, but I can share the post hoc 2021-22 values if those would be of interest.

A post was split to a new topic: See previous draft results

I’d definitely love to see the post hoc numbers from last year. Thanks.

Here you go. Some of them look a little off, so I’ll revisit when I get a chance. Remember that it’s based on season totals, not per game. So guys who missed time are at a significant disadvantage given the methodological approach. It’s not the only way to assign values.

curious if you think the addition of the second UTIL spot will change these numbers at all? or does not it change since the numbers are based on 21 roster spots and not X amount of starters?

In theory, the addition of the second UTIL spot will lower replacement level, which will contract the difference between the elite and replacement-level.

However, in practice there’s not much difference in SGP between the 120th ranked player and the 150th ranked player. I’m comparing #120 to #150 because that’s approximately where the worst regular starter in a 12 team, 9 starter league compared to a 10 starter league will typically be (I’m looking a little higher than 12*9=108 because good teams will have a disproportionate share of top players).

To illustrate the point graphically, here’s what the scatterplot of the value curve (SGP_adjusted on y-axis, SGP_rank on the x-axis): 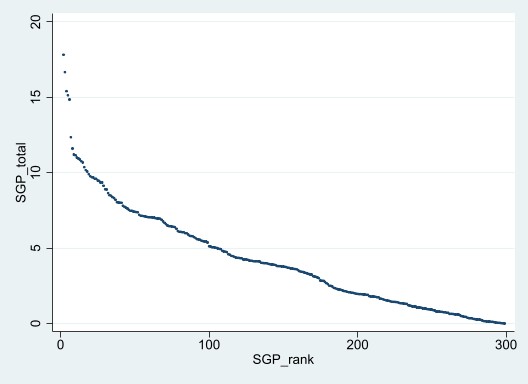 As you can see, as SGP rank increases, the value curve gradually flattens out, particularly around where the replacement-level for starters are (i.e., somewhere around #120 and #150 top players). It gets a little steeper the closer you get to #200 and then is basically a straight-line from #200 to #300.