It is entirely possible I have misread something in the feature page for this, and Ill preemptively apologize if this is user error - but I think maybe the Projected Games is a little funky right now? It started by projecting the games I had left for the week based off of the lineup i had set pre-this feature showing up, but I have since benched all players for this weekend and it is still projecting them, maybe based on the old lineup settings? Heres a screenshot - 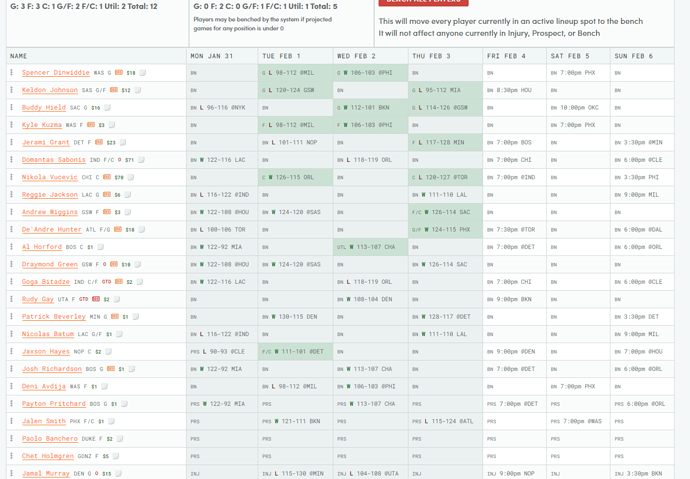 You can see the Guard games are projected to be 0 even though there is no one starting any games going forward, with 3 games left to play. I only bring it up so quickly because I wanted to avoid an auto bench based off of the "projected games remaining ", as when I set someone to start the guards section immediately goes to -1.
Im hypothesizing that this might just be an issue this week cause of the mid week rollout and it just resolves itself going forward

Ah yeah I was worried this bug was still lurking. @chy924 ran into it during testing and I have not yet been able to recreate.

Oh and of course I am actively investigating this bug now!

Okay great, thanks for clarification!

I am pretty sure this bug manifests itself the very first time you use the Weekly View as a result of transitioning from lineup slots persisting to the new world of lineup slots not persisting.

So if you run into this bug and you don’t want to wait for my fix, you don’t have to! Hit “Bench All Players”, wait 10 minutes, refresh the page, and you should be good.

I went to set my lineup for next week (Week 22) using the weekly interface and encountered some weird issues. Specifically, it hung up several times saying that changes weren’t being saved. I thought that benching all players and restarting might help, so I cleared cache and reloaded the screen. But right before I started plugging players back in, I noticed that I had a projected 31 games remaining. Clearing cache again and reloading didn’t fix it.

This is what the screen looks like (see Projected Games Remaining): 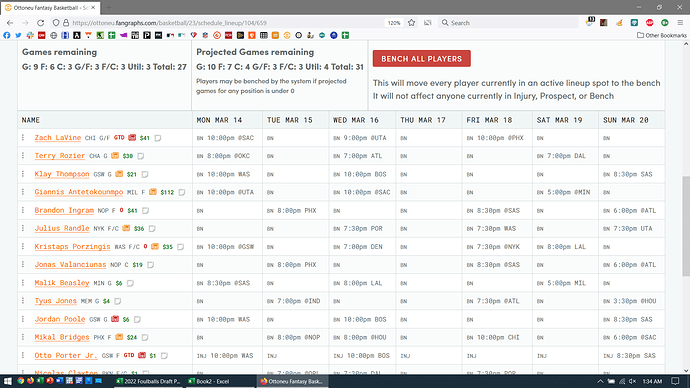 Yeah this remains a weird bug with “Bench All” but as I wrote earlier in this thread you can close the page for 10 minutes and come back and the projected games should work fine.

I’m curious about changes not being saved - if you continue to see that, I think that would deserve a separate TechSupport report than the Bench All-Projected Games issue.

Something goofy is happening with the projected games on the Lineup screen. It allowed me to start guys, so I’m assuming it’s something cosmetic. But it’s showing that I have “-1” games remaining rather than 0 (I made 30/30 starts this week). 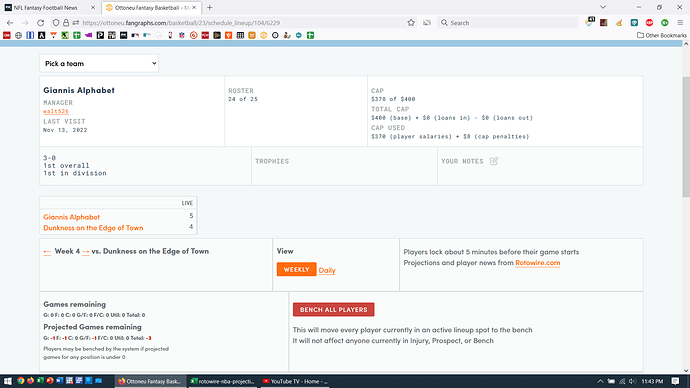 This seems related to this thread from February. I went into the database and confirmed that you did not go over game limits, so I think the advice of “wait 10 minutes for the cache to clear” is probably correct, and while I’m sure you didn’t hit “Bench All Players” today (or did you?) it does seem to be a bug with the math done directly in the cache, which is done for speed purposes and apparently is not very accurate.

EDIT I was wrong, I introduced a bug today on this front, and it has been fixed.