In my matchup this week, it looks like my team was somehow allowed to have 7 games in the UTIL position over the course of the week. The 7th game is still ongoing, so maybe it will be removed, but as of now, it looks like it is being counted.

This is the matchup https://ottoneu.fangraphs.com/basketball/43/game/7923 where it says -1 remaining games at UTIL.

I’ve fixed this specific instance and am continuing to investigate the underlying cause.

This is my first year playing ottoneu basketball. There’s a cap of 30 player games that can be played in a week, correct? This past week, I thought I was at 30 when I last monkeyed with my lineup on Saturday. When I looked at the week results today, however, the system showed I went 1 over the limit (still don’t know how that happened): 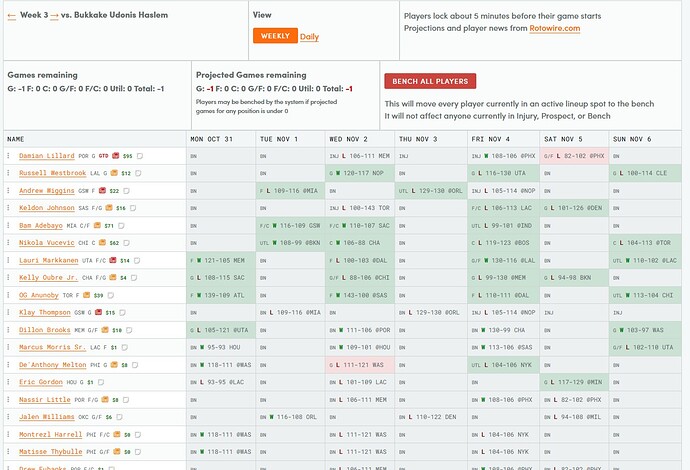 I couldn’t find anything in the rules that explicitly discusses the number of player games permitted during the week, or if there’s a penalty for exceeding the cap. Is there?

Well there’s no penalty because the site really shouldn’t let you - it should move players to the bench once you go over limits. It does not seem to be doing that!

This is an open technical issue with the site and I’m investigating. I’ll go back and remove your last game at G from last week.

If anyone else is able to go over game limits consistently let me know! The more information the better on this bug.

I have made a slight change to the site to attempt to fix this issue. Going forward, if a player in your lineup is in an in-progress game, that will count towards the game cap. If that player never enters the game and has an official stat of 0 minutes for that game once it is final, you will be refunded that game for your weekly game caps.

The clue for this solution came from this post from last year:

What happens if player in active lineup doesn't play?

BTW, you can see this is real time on the match-up page if you’re attentive to the games remaining values: you’ll have a game remaining on the lineup slot until the player actually plays, not when the game starts.

Now you should lose that game remaining on that lineup slot immediately upon the game starting and will be refunded it if the player never enters the game.

I’m not marking this as ‘resolved’ quite yet and continue to investigate / keep an eye on things.