Probably user error, but asking just in case it’s not. When cutting players to get legal, the feedback box doesn’t seem to calculate your roster correctly. The feedback text will say your roster is valid before processing without taking into account the $1 per player requirement. After a player is cut, the site recalculates, of course, and correctly throws up a warning if you’re still not legal.

Do you have a screenshot of the site doing this? I’m not sure what else to say other than the site absolutely does check for $1/free roster spot.

I’ll try to remember to take a screenshot next time. I am surprised no one else has noticed. It’s happened to me maybe three times in the last years or so. Thanks Niv.

Here is the site correctly saying my roster would not be legal with 3 roster spots and $2 free.

Perhaps it’s a slightly different scenario. In my experience, the feedback says it will be valid when it’s not. Maybe it’s not related to the $1 player thing. 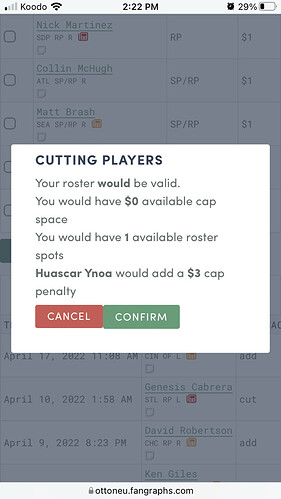 If, after you click Confirm, the feedback at the top of the page tells you your roster is not valid, then, yes, that’s the scenario.

What happens if you immediately reload the page after cutting the players? Does it still say that your roster is illegal?

Oh yeah, I always reload, thinking it’s a cache issue or something.

Ah, I definitely misunderstood. When you make your team legal from an illegal state it sometimes doesn’t clear the “your illegal” notification? I’ll investigate!