Is there a template for trading away a superstar player?

I’ll be writing more on this topic next week for RotoGraphs, but I think @haroldlutz brought up an interesting question recently: 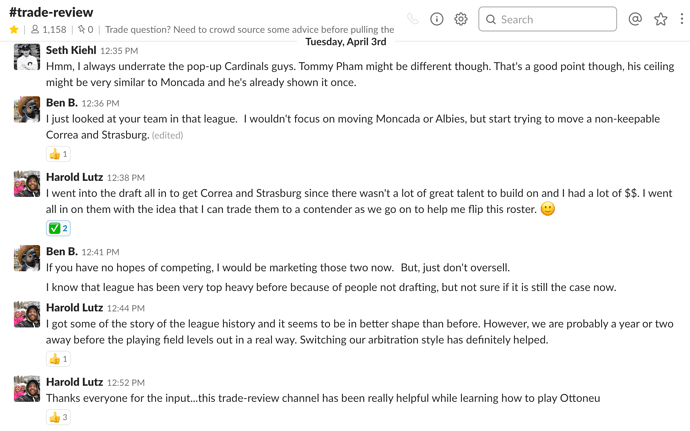 For those owners that find themselves in a situation where they know they will be trading away a superstar player (let’s loosely say Top 3-5 at each position), is there a “template” or rule of thumb about the best way to maximize the return for that superstar player? In other words, when is the best time to capitalize, and what sort of player return should you be targeting to come away with the best possible package that sets your team up for future success?

There are a lot of variables here but I think this would be an interesting discussion from the community.

Having just done this, trading Trout and parts for Cespedes, Posey, Conforto and parts, my thinking was as follows:

At this point I was ready to wait or simply cancel the idea but I got a very fair offer almost immediately and moved forward with a deal.

When I see what looks like a bad superstar trade it usually comes down to a manager not seeming clear why they are making the trade or whether they are trading to compete or rebuild. Rebuild deals also seem to go wrong when they target cheap players with upside instead of very good players with surplus.

I really liked that trade @Henry.Woodbury and your rationale makes perfect sense. I also think your logic and process is a good reminder for others trying to move superstar talent.

Putting a Mike Trout trade together so quickly is not easy.

This is excellent advice. Especially points 3 and 4 - engaging in that way is the only way to get good value back and opens the path for other trades in the future.

Ottoneu is a game where your relationships with other owners are the secret currency.

Great advice! You got a nice return for Trout, I’d say there is a lot of value in the extra “parts” you received. $3 Kiermaier, $7 Gray and $6 Faria seem like they all have keeper potential, this is my first year, would others agree?

You mentioned a switch in arbitration systems has helped provide balance. What system did you switch to?

I think @haroldlutz is the one who had a switch in his league.

Yes. DON’T. You will almost always lose. Especially early in the season. And almost certainly if you are getting a speculative return.

Where I think people always miss the boat on trading an elite asset is on two fallacies.

The first point assumes that a player like trout or Harpers salary will inhibit that owner from
Keeping them and they’ll be reauctioned next year. That rarely happens, at any salary. Just look at the ownership history in your league.

The second point is more important. You have until the cut deadline next year to find a suitable return for your superstar. You do not need to move him now unless you are moving him to acquire more points for this season that that player will give you. Don’t trade a high value asset unless you are getting a clear return that you think nets you more points next year with auction dollars than that player does.

When you factor in the inflation that likely happens at your auction, the level of high end talent usually available at auction, etc. it almost never makes sense to move a high dollar high point keepable asset for a prospect return now. Specifically because those prospects probably aren’t the ones that people want next year this time.

A $30 Cutch? $30 miggy? Other guys that can help a team this year but likely don’t help you next year? Move them all. Whenever you feel it’s time to cash in. But don’t make the mistake of underselling a high value asset because you have to rebuild.

Ottoneu is a game where your relationships with other owners are the secret currency.

This is a good line. Might have to steal it @nivshah

To me I think @Henry.Woodbury’s “prospect” in the deal is Conforto ($12). There’s risk like with top prospects, but the reason others trade for them is because of the high potential surplus if things break right. Conforto could be a $25 OF (or higher) by season’s end if healthy, so I like buying that stock with the rest of the package.

Last year I took over a team in 586 that had not really been active and the roster reflected that. I also was one of a few owners who were taking over teams last season.

Most of the good surplus talent was all located on teams who have been active. The inflation in our league at draft time reflects that as well.

Last year we voted as a league to switch from vote off to allocation and I think that helps a ton. It will probably take a bit before the league really balances out (and some patient owners).

A lot of the owners in my league have expressed a desire to wait for a little bit before making any major deals, especially with young surplus talent that I would need in return.

I was able to make a couple of moves that I think will help my team in the long run but I’m still not close to competing. So I know that in the end Strasburg, Correa, and Thor are probably better used as trade chips to make my team better.

However, I do have concern given the inflation of our league with trading a player like Correa. @joecatz I think hits on some of my concern. If I trade Correa, did I just trade away maybe the only superstar player that I’ll be able to get on my team?

I am also in a second year league that carried an empty roster through last season, and the draft was incredible to behold. Active teams were very conservative in making drops in the offseason, so with limited cash available in the auction and one team with a huge % of it we saw prices soar in the first round beyond any semblance of actual value. My team has definitely benefited from this imbalance, and it may have even gotten worse since it was easy to swoop in and get good values at the end of the draft. Early returns seem to indicate it will be possible to flip top-level talent (though I am certainly not buying), but valuations are really out of whack as this trade highlights: https://ottoneu.fangraphs.com/724/viewtrade?id=38399&pending=1

Wow, a $103 Machado. That is crazy but also kind of awesome

The whole draft was insane. The two teams with biggest auction budgets are new to ottoneu and had too much purchasing power for their own good. https://ottoneu.fangraphs.com/724/draftresults

Goodness that draft is giving me anxiety. I thought ours was bad!

This makes me want to start a new league and invite all the owners like us that’ve taken on crappy teams as first experiences. We deserve a better ottoneu experience lol.

Man that was my experience to a “T”. My first Ottoneu auction was a roto team that had 22! Points last year. The only good players in the draft went mega high and I find myself rocking a whole lineup of Kole Calhoun types. Just waiting till mid season to see if I can grab something of value from cash strapped owners in exchange for $.