When on mobile, the league name is gone and replaced with League. Would be nice to have a way to differentiate leagues with some sort of marker or note.

I agree, but I imagine that one reason is that some leagues have really long names, which makes them difficult to display. There’s a balance between aesthetics and functionality, I would think.

What if there was another text field with a shortened version of the name for display on mobile? Like “Three Tool Front Office” became “3TFO”? That would be descriptive enough to let you know what league screen you were in. Limit to 6 or fewer characters (league is 6).

I’m … conflicted about this, bc I’ve trained myself to just hit the Team Switcher (down icon next to the Ottoneu logo) and pick the league/team I want, without looking at the rest of the page.

So I partially second @walt526 above: If this change is made, please leave six characters in that spot on the interface, so I don’t get confused.

Would just using the League number there help? You’d have to remember which league was each number but that wouldn’t take more than a few days or weeks really to learn and it would still be an identifier that wouldn’t take up much space at all.

I’ve added the league name to the top of the page on mobile. 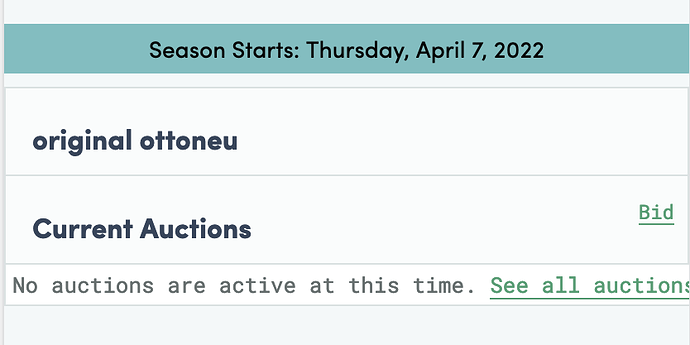 This should not appear on desktop.

Looks great! This wasn’t my request but I’m on mobile a lot and this will be very useful. Thanks Niv!

Love it, thank you.