I know this has come up in the past, but I couldn’t help posting this one, since Votto and Dylan Moore were agent smithed by Garrett Cooper: 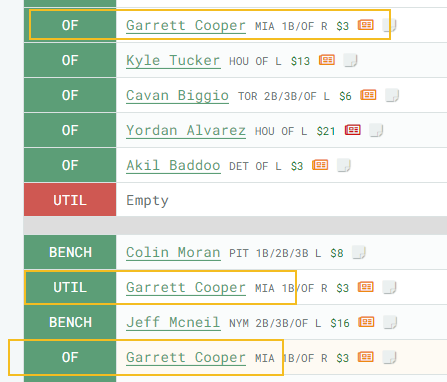 To be clear, everything was fine after a refresh, heh.

Whoa. Can you recreate this?

I tried for a bit, but no. I only see this happen very rarely.

I do not think I’ve seen this one before. Tremendous find if someone can reproduce it consistently.

I private messaged you about a similar event back in August of last year (I believe this link will only work for you? https://community.ottoneu.com/t/lineup-duplication/7857). That was slightly different in that the starting lineup spot “UTIL” became “1B”, but the actions taken were essentially the same, just swapping players–which duplicated the player and the position (just not to bench like this time).

Here is the image from that other event: 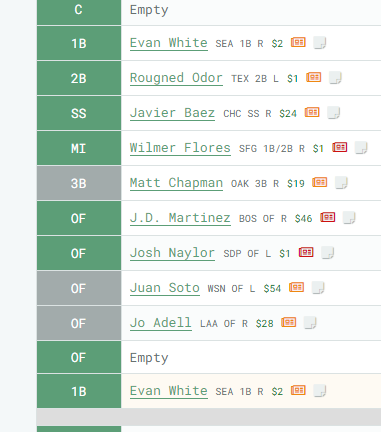 Right, that rings a bell. I could believe these are related issues but sorting out reproducing it is the thing.

So, I tried a whole bunch, and I’ll try some more while watching network traffic to see if anything obvious happens. So far, no luck. It did get me to write a script to flip guys in and out of the lineup though! That was fun. I might just expand that to read the table and see if players or positions duplicate, and write those instances out to a log. Run it a few thousand times each morning and see if I can’t duplicate it for real.

My guess is it is related to who is in the second slot that is being swapped into and what moves were made leading up to it. A real tricky one.

Hey Niv, got this one to occur again, kinda. A variation on the theme if you will: 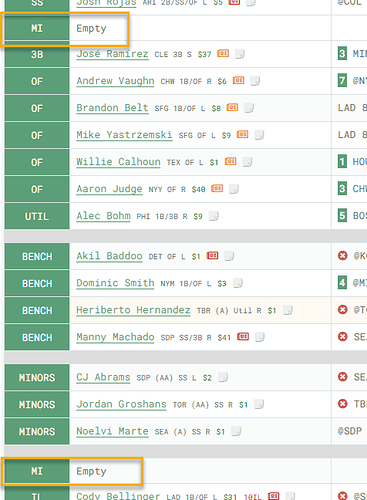 This time Anthony Santander was eaten in the process (he was the MI in the IL section and I’m sure will come back on refresh). The action taken was moving Machado to the bench, then swapping Rojas (from 2B to MI) and Lowe (from MI to 2B) and moving Rojas into the empty SS slot. Then trying to move Santander from the IL to a Bench slot.

Unfortunately, I wasn’t recording before I started setting my lineup, and everything after seems fine. For instance, the lower MI swaps with SS, however a player in that MI slot can’t swap to another MI slot.

Does anyone else anywhere have this issue? I have received 0 emails about anything like this happening and no one else is posting to this thread. If anyone else other than @doorbot has seen this, please post here.

I wonder if this is related to possible hiccups with my work VPN? I usually only notice this on my work computer.

I could see a world in which if 1 out of 10 changes are eaten by a VPN and not properly sent through to the server, some goofy things would happen, but that also seems VERY specific and weird.

Right, heh. Lately I’ve been using Chrome, but before that I saw this in Firefox too (with various user agent strings).

I’ve seen some issues along these lines. Seems to happen if I’m making a lot of moves really quickly. It always works to just refresh the page so I haven’t complained about it. As much as I enjoy adding to Niv’s to do list.

Yeah, I was definitely reticent to bring it up, heh. I’ve mentioned it to him in the past on Slack, so I figured I would document it since I had the page with the changes showing.

One other thing, this is a different computer from the last one, just FYI. So it wasn’t tied to the same one that produced the initial one.