In an attempt to look for the most serious owners and long term commitments to the league, there is a good chance I will require owners to pay three years of the entry fee ($50/year x 3) up front ($150).

Couple of questions – are you planning a 40-man auction before the October 15 MilB auction? Also wondering if a slow-draft is an option.

MiLB$0 players may be “called up” (added) to an owner’s standard 40-man Ottoneu roster at any time during the calendar year, except the days in which a draft (annual auction or prospect draft) is in process.
Owners are required to “call up” a MiLB$0 player before they can cut them from their roster. The league commissioner will add MiLB$0 players to league rosters using manual commish tools. All MiLB$0 players that are cut will incur a $1 cap penalty.

Some clarification on these rules:
Our next prospect draft will take place in March, immediately following the conclusion of our 40 man auction draft. While you can technically “call up” a prospect from your MiLB$0 at any time, you can only cut those prospects when the $1 cap penalty applies, so essentially only after the 1/31 keeper deadline.

In practice this means that if you want to free up a few MiLB$0 slots for the next prospect draft (March, post-auction), you’ll need to a) call up the prospects to your roster, and b) cut the player immediately following the 40 man auction, thus incurring the $1 cap penalty.

The intent of this rule is to associate some risk (cost) to MiLB$0 transactions, and force owners to make some difficult decisions. In this case (March), your decision to free up a few more MiLB$0 slots to draft in March will come at the cost of a $1 cap penalty for each prospect you cut.

So you can’t cut guys from your milb roster between the end of the season and the keeper deadline? Let’s say it’s September 15th and there are three players on my milb roster I don’t want anymore. To get rid of them I have to call them up to the big roster and cut them before the season ends?

All MiLB$0 players that are cut will incur a $1 cap penalty.

I don’t like the way I’ve written the rule, because of this line: “All MiLB$0 players that are cut will incur a $1 cap penalty.”, which forces 40 man transactions of called up prospects to work differently during the off season.

My preference is that you can a) you must call up a MiLB$0 prospect to your 40 man roster in order to cut them, b) you call up MiLB$0 prospects at any time. With these two stipulations, you could technically call up a MiLB$0 December 1st and then cut them with zero penalty (because it’s prior to the keeper deadline. This way called up prospects work just like any other 40 man player, so if you don’t cut them 1/31, you won’t be able to open that MiLB$0 slot for the next (March) draft unless you cut and incur the $1 cap penalty immediately following the 40 man auction.

I would recommend we change this rule to clarify this.

Seems like you should be able to clear out the milb roster in the offseason, just like you can clear the 40 man.

Owners are required to “call up” a MiLB$0 player before they can cut them from their roster. The league commissioner will add MiLB$0 players to league rosters using manual commish tools. All MiLB$0 players that are cut will incur a $1 cap penalty.

836 Rule Change Proposal:
Stating “All MiLB$0 players that are cut will incur a $1 cap penalty” will prevent owners from cutting MiLB$0 prospects once they are “called up” to the 40 man roster even during the off season (prior to keeper deadline). Ideally, “called up” prospect transactions should function identically to regular 40 man roster transactions (i.e. you can cut in the off-season without penalty; you cannot cut between the keeper deadline and the 40 man auction, etc.).

I recommend we change this rule to say:
“All MiLB$0 players that are cut during the regular season (February 1st - October 1st) will incur a $1 cap penalty.”

We will not use a slow draft for our initial, first season 40 man auction, but I’m open to it in subsequent years.

For those in @Dynasty836, please take a moment to vote on this important rule change.

With almost all votes in, this change will pass easily.

The rule will be changed to:

“All MiLB$0 players that are cut during the regular season (February 1st - October 1st) will incur a $1 cap penalty.”

MiLB$0 players called up during the off-season can be cut just like any other 40 man roster player, penalty free (prior to keeper deadline).

vote yes to change; I tried to click on it but it didnt allow me to.

Big time congrats to @tobanks for winning the inaugural season of the @Dynasty836 league. Nice come from behind win late in the season. Well done!

I am going to make the executive decision here that if an MiLB$0 player is cut and then redrafted by a different team during the next draft, I will remove the $1 cap penalty from the player for the previous owner (that owner will often need to remind me).

Congrats to @hernandez17 on a great championship season in 2019. Well done, from start to finish. 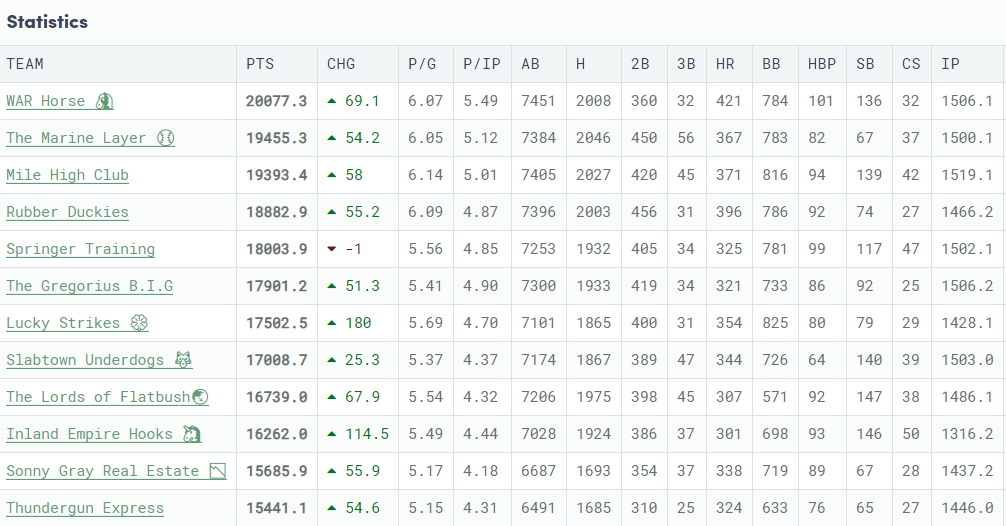 All, I would like to propose a 2020 rule change that we increase the MiLB thresholds by ~10% to further challenge the group as the league develops. To date, the lower number of slots a team has achieved is 13, so I recommend we tighten these a bit so it becomes a little more difficult to reach the MiLB targets for AB and IP.