The 2016 trade deadline in @BullDurham was a blast. This is why Ottoneu is the best. 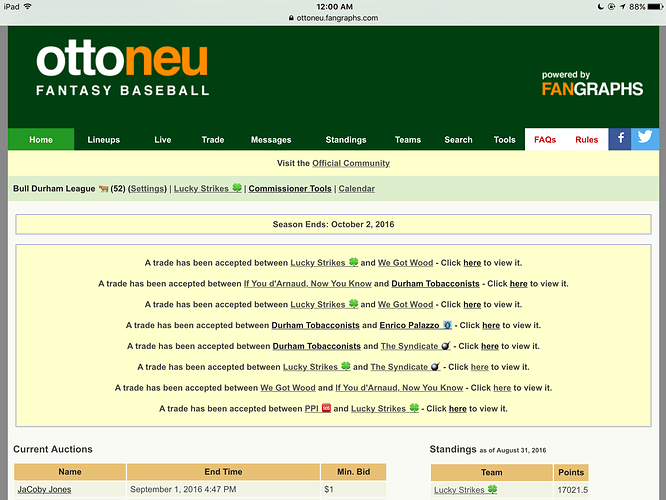 This was absolutely the most fun 24 hours I’ve ever had playing fantasy sports. Took some huge gambles in multiple leagues and even tried to move a $28 Arrieta in 52 at the very last minute.

This is my 3rd year in Ottoneu and my first year in multiple leagues, went from 1 to 8, and I’ll give everyone a single piece of advice. Communication is the key. If you can get your league on a forum that allows quick messaging you’ll have not just a fantastic deadline experience, but a better overall experience altogether.

I’ve basically spent the last day on slack and talking via my Ottoneu inboxes and league message boards. And while it wasn’t great for work productivity it was an awesome experience.

I know a lot of people are aware of the insane drama that occurred last week in 504. Once we cleared out the owners that didn’t want to be there anymore and replaced them with people that did the activity immediately picked up and we saw 5 trades and a ton of offers. We went from a league that some thought might die out to one I feel is completely healthy. Awesome experience all the way around.

Also @LuckyStrikes will regret not trading me Edwin Diaz, Alex Reyes and Clint Frazier for a keepable Arrieta in a tight race in 52.

I have no doubt I will regret this. Already do, but somehow couldn’t pull the trigger. The “clock” of the deadline adds some real pressure, especially when in contention. So close. With just a bit more time I would have made this deal. It won’t take very long to know if this was a really bad decision on my part.

He could have had Greinke and Cutch (plus possibly another piece) for basically the same package.

I definitely tried to use the clock to increase the urgency but I’m also pretty sure I should’ve started that process with about an hour to go instead of 30 minutes to go. But like I said on Slack I am also kind of glad you said no because it’s my last keepable share of Arrieta.

I was exhaused from four late night auctions in five days, so I spent the last two+ hours of the trade deadline sleeping!