Hi @nivshah ,
Do you know when voted-off players get removed from the Ottoneu team rosters? They currently still show up, be it in Red to indicate they are voted off, but they still get included when exported to csv etc. They also do not show up in the Free Agent list per league on Fangraphs as free agents.
Thanks,
RJ

Voted-off players are considered ‘restricted’ free agents. They are never removed from teams. When they are won at auction (in the auction draft), if their original team wins the auction, the discount is automatically applied.

Totally an edge case, but this issue makes the surplus calculator pretty useless for any vote-off league right now.

Same pain here. They are not keepers, but Free Agents (be it restricted), but show up as keepers in all roster downloads. Caveat writing time… ;o)

I guess there isn’t a huge benefit in showing voted-off players on roster export, so I could suppress them specifically in the exports.

That would be great Niv. Would that also mean they would be automatically included as League Free Agents on Fangraphs?

Unfortunately this will not affect the FanGraphs Free Agents list.

Thank you for doing that, much appreciated.
Is there anyone I could contact at Fangraphs with any chance of changing that? Just to be clear I am talking about the Ottoneu League specific Free Agents on Fangraphs, like http://www.fangraphs.com/fantasyleaders.aspx?pos=all&stats=pit&lg=major&qual=0&type=6&season=2016&month=0&season1=2016&ind=0&team=0&rost=0&age=0&fl=682&ft=-1&players=0 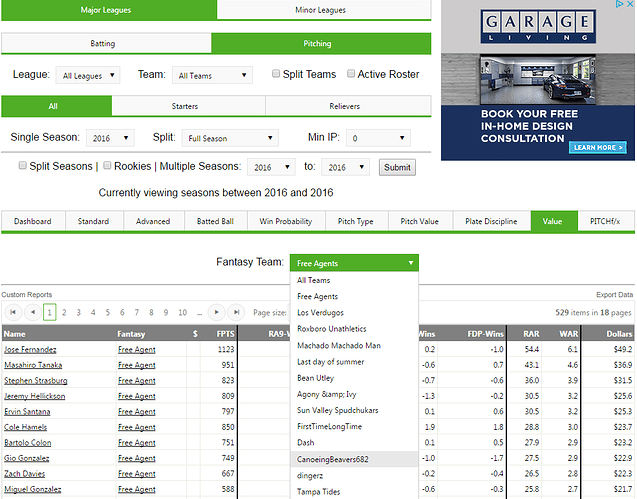 Nope, I’d have to rewrite a big section of vote-off code for that to work, and that’s low priority at best right now.

I totally understand, just wasn’t sure if that was something you controlled or not. Thanks again!

Thanks Niv, I think this is one of those changes that 99% won’t notice but 1% of us greatly appreciate!

Last year was my first year in a vote off so I can’t remember. Is the vote-off selections private until you make your own selections?

Vote-off selections are private until November 15. On November 15 you will see full results (which team voted for which player) and players will be marked as restricted free agents.