Here are some summary statistics (I excluded one team who didn’t set a lineup in Week 1 and wound up with 0’s for everything):

And here are some summary statistics for teams who recorded wins:

And here is a correlation matrix that shows the relationship between the categories:

It’s a small dataset, so there’s limited amount of what can be done with it until we get some more weeks worth of data. But I’m going to be playing around with it some and see if there are any insights to discover. For example, I find that BLK, FG%, and FTM are the strongest predictors (i.e., only statistically significant) of likelihood of winning. PTS and STL are the weakest. This is based on a multivariate probit regression with week fixed effects. 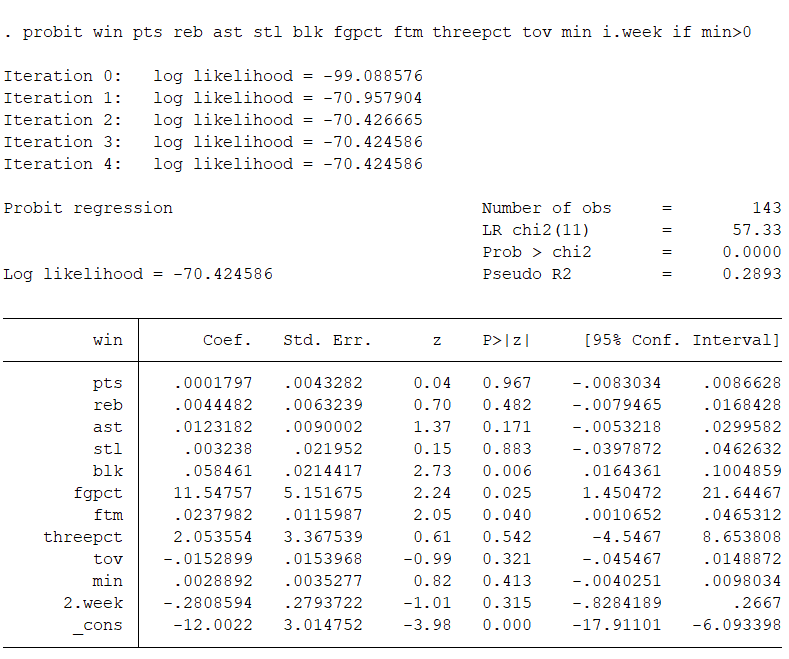 Happy for any suggestions for additional analyses to run with these data.

Here’s a Google Sheet with the data:

Here’s an update of the data through Week 3:

First, summary statistics for all teams in category leagues (excluding the one team that didn’t set a lineup in Week 1):

And here is the summary statistics for teams that won their matchup:

For the next piece of analysis, I wanted to test the relative likelihood of winning a matchup conditional on winning each category. So I created a set of binary variables (1=won the category, 0 if not) and used those as the covariates in a single linear probability model. In addition, I used league fixed effects to account for all unobservable characteristics between leagues. In addition to the 9 categories, I included minutes played as an indicator as well. This was the resulting model output (constant not reported):

As you can see, all of the coefficients are statistically significant and in the expected direction (e.g., turnovers is negative and all others are positive). Most of the coefficients are all around approximately 0.20-0.25, with the exceptions of points (0.323***) and rebounds (0.343***). In other words, winning points and rebounds are stronger predictors of winning the match-up than the other seven categories.

Because it’s a linear probability model, the coefficients are easy to interpret: leading a category increases your likelihood of winning by X% (where X is the coefficient translated from decimal to a percentage). For example, leading in rebounds translates to about a 34% increase in winning matchup, whereas leading in turnovers decreases the probability of winning by 22%.

For Category Leagues Only, here are the Top 5 Weeks in Each Category plus Minutes Played (League Number, Week in Parentheses):

Congrats to all. Apologies for any typos including misspellings of team names.

Before getting into the post week 4 summary statistics, just wanted to report that previous versions of the summary statistics did not include leagues 40 and 41. I discovered that there were additional category leagues after the “Browse League” function was added to the site earlier this week.

So anyway, here are some summary statistics after Week 4. First, all teams (excluding teams that do not record a MP in their entire weekly lineup:

Next, teams that won their matchups:

And teams that either lost or tied their matchups:

Note that matchup winners are more likely to lose TOV than win it, the only category for which that is true.

In case you were wondering the frequency by which the 192 matchups so far have been decided (includes matchups where one team didn’t set a lineup), here are the counts and frequency of those category matchup totals:

Also, there are 9 remaining undefeated teams across the eight category leagues:

Note that there are also 10 teams that have yet to win a matchup, but I’m not going to name them.

Finally, in terms of predictors of winning the matchup within a multivariate model with matchup win as the binary outcome (regression results not presented), winning FTM has the strongest association to winning the matchup (followed by PTS and REB), while AST is the lowest (followed by STL and TOV). I’ll just add that this is generally consistent with what I’ve seen so far in other interrogations of these data: teams built around big men are having greater success than those built around guards.

For anyone wondering about the relationships between leading in one category versus another category, here is a raw correlation matrix to start the conversation:

First, here are the summary statistics through Week 5 for all teams accumulating 600 or more minutes per game (more on why 600 below):

And here are the summary statistics through Week 5 for all winners:

So the reason why I set 600 MP as a threshold is that–with two exceptions in Week 1–every team that has won a matchup accumulated more than 600 MP. Here is the likelihood of winning a matchup based on MP in 50 minute increments (not controlling for quality of opponent):

Or, alternatively, what those data look like in graphical form (probability of winning is on the y-axis, MP is on the x-axis): 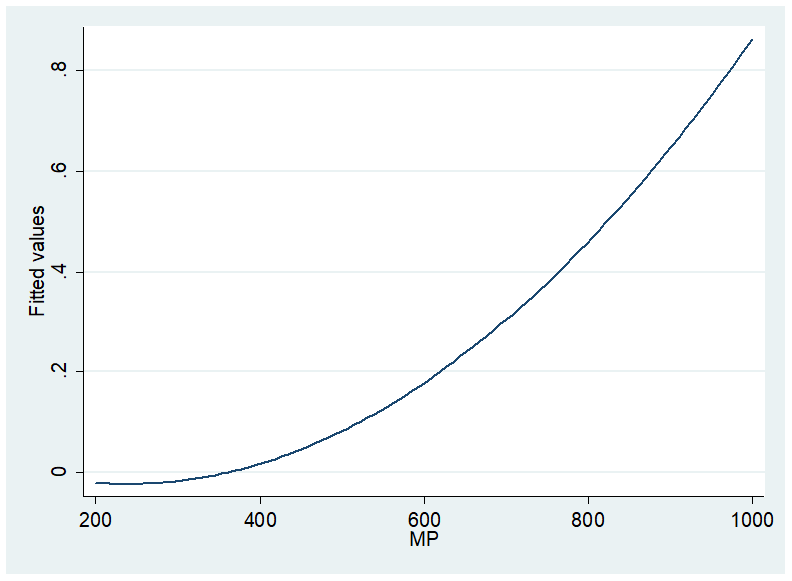 It’s Monday, so here are the summary statistics through Week 6!

And here is all teams with >=MP who won their matchup:

Finally, here are summary statistics for all teams who lead each category in their matchup (also subject to 600 MP minimum): 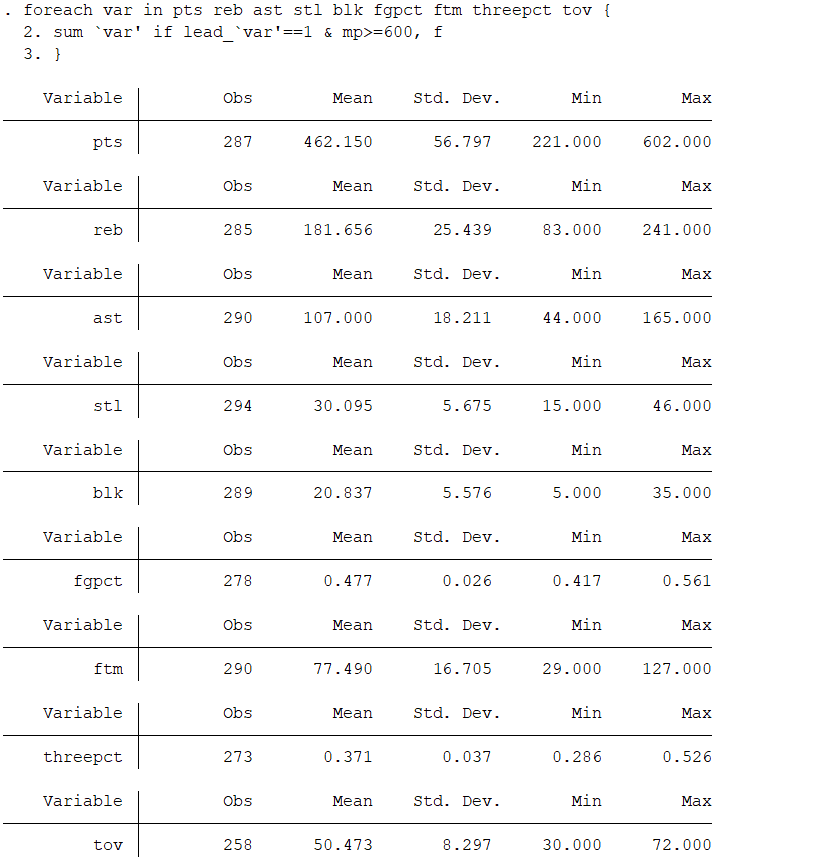 Based on these summary statistics, I’ve put together a little spreadsheet that computes the probability of winning a category. It assumes a normal distribution, which the distributions of category leaders approximately are (based on eyeballing the histograms). To use this tool, follow these instructions:

Please note that this doesn’t take into account the quality of your opponent; rather, it assumes an average league winner.

First, summary statistics for all teams who played 600 or more minutes (see a previous post for justification for that cut off): 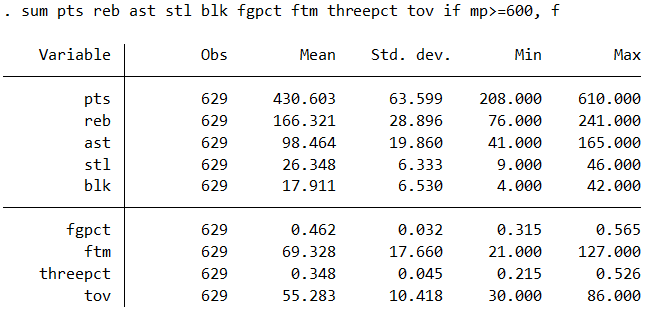 Next, summary statistics for league winners subject to playing 600 or more minutes: 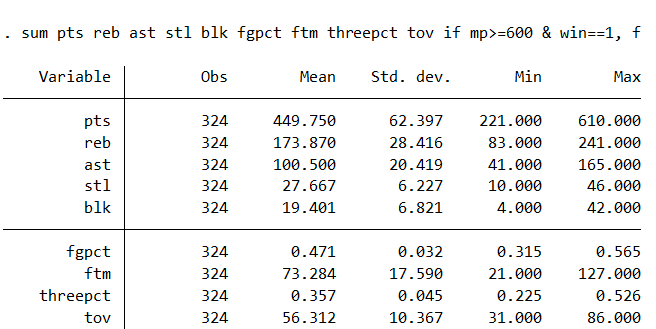 Finally, summary statistics for leaders of each category, subject to the 600 minute minimum: 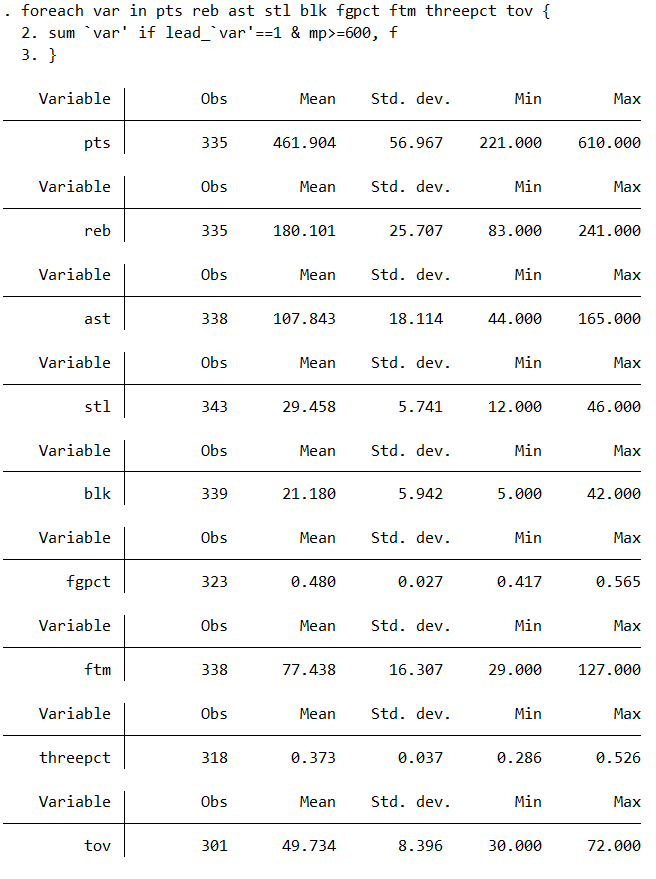 Here are the teams that have won their category in all 7 of their matchups so far:

Finally, there were a couple weekly records set this week in a couple of categories (Points and FG%). Here are the global weekly leaders for all nine categories (FG%, 3PT%, and Turnovers subject to minimums):