Groking the results of a startup draft with all rookie managers

I’m working my way through the video in the Ottoneu Surplus Calculator 2021 post, but I’m still unclear on what the inflation percentage means. Specifically what a large negative percentage means. 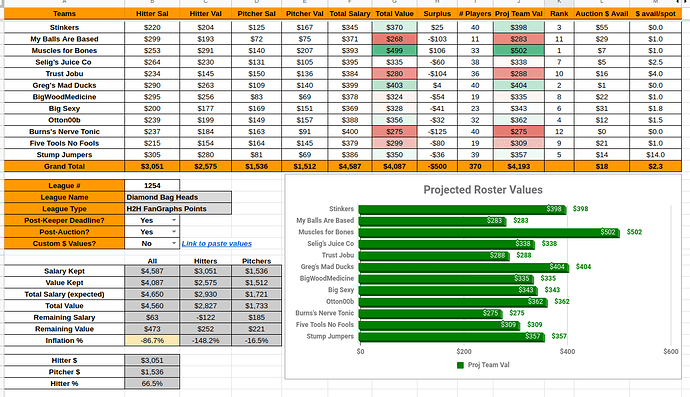 Is it accurate to say that with such a large, negative inflation percentage…

Besides the inflation value and general overspending (one manager spent $371 on 11 players, oops), any other numbers look alarming?

Any general advice I can pass on to the managers with the lowest team values? We’re all figuring Ottoneu out, so it should be an interesting season as we all adjust throughout the year.

FWIW, I think inflation is only a helpful concept/metric between the keeper deadline and before/during your auction. Since your post-auction, I wouldn’t worry about it until next offseason.

That said, my interpretation of what negative inflation means is that there is more value available as free agents than cap space available. That’s because the value on the roster is less than their salaries in the aggregate. According to that screenshot (and assuming I’m interpreting it correctly–I haven’t used the SC in a while), you have $473 worth of talent available as FA compared to $63 in total free salary. So I’d be evaluating my roster and the FA available and see if there are opportunities to make some cheap upgrades.

On the other hand, those values are based on projections (FG Depth Charts, IIRC), so they’re only as accurate as the underlying projections. If you believe Schwarber is worth $20 and SC says he’s worth $15, then SC isn’t going to reflect your expectations (not real values–just making them up for purposes of illustration). So negative inflation isn’t necessarily the case if FG Depth Charts is inaccurate.

That said, all other things being equal, I always aim to leave an auction with my team worth more than $400 (i.e., have surplus value). But I use ATC projections, so to the extent that ATC and Depth Charts differ, my valuations are going to be a little bit different.

But, just to reiterate, the big takeaway from these numbers is that there is a lot available FA talent. So if you trust Depth Charts, figure out where you can upgrade. The SC is a useful starting point, but not necessarily the final word on how to acquire and cut, IMHO.