Some Ottoneu leagues are beginning to experiment with custom rules like creating “5MiLB”, adding arbitration “coupons”, eliminating loans, taxing loans, or even handing out franchise tags. This forum is setup to discuss those custom rules, the impact they have on the game, and to brainstorm new ideas for Ottoneu in the future. 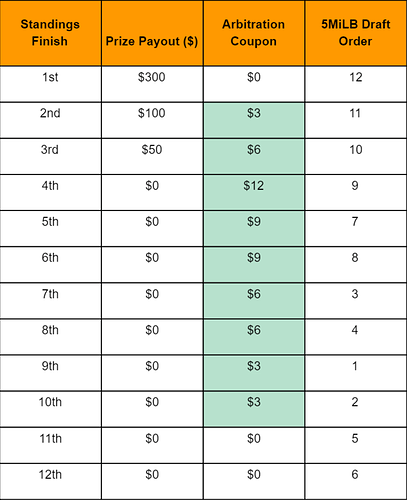 I have early indications from Niv that I may be able to create up to a 20 team, $100/team prize Ottoneu league in 2017. Just brainstorming at this point and gauging interest but leaning towards 4 x 4 with “coupons” and “5MiLB”, included, among possible other customizations. If interested let me know. Lots of pre-planning needed to accommodate such a large initial auction in the spring.

Just for reference, here’s what the Brinksmanship projected standings look like on August 15th:

Hard to say if this has anything to do with the incentives (it is a first year league, too), but it’s been a lot of fun because even the lowest teams have reason to buy and stay active.

Has there been any progress toward allowing larger leagues?

What size league would you be interested in? There have been a few conversations about larger leagues, but I haven’t seen anyone who wanted to follow through on even a 14-team league because of the lack of OFs, for example.

There’s been continued discussion on Slack about trying to pull off 20 or even 30 teams. Even at 20 would probably need a way to limit the OF to 3 spots vs 5, remove MI spot, etc. I’ve been looking forward to trying it, I think the lack of interest recently is primarily just people assuming it’s not going to be available. If there were a group of 20 or so lined up in the next few weeks do you think it is?

I’ll work on getting a group of 18-20 people committed to trying it.

I’m in for any larger league.

Please start a new thread about this and we’ll see what makes sense.

This way we can see who is really interested and discuss some of the surface level challenges we see.