Players have not been distributed yet, but I have assigned everyone a team. The league’s generated website should have all the hiring notices shortly.

I’ll simulate the draft tonight and then start sending out instructions on how everyone can download the league file and log in to their team. As a note, the security in this setup is relatively lax and I’m hoping we can all trust each other to not mess with each other’s teams.

We’re all new to online OOTP, so please read through the manual to get acclimated with the basics of how this works.

I’ll have the initial league file available shortly, and then will DM league members with the FTP server/password info.

We had 2 more join so I’ll set up a 24-team league tomorrow and assign everyone teams and sim out the draft. Then we’ll get everyone joined up and spend the next week going through pre-Spring Training free agency.

In broad strokes, each owner is going to have to download the league save file and load it into OOTP, and then select their human manager. They’ll be able to do everything mentioned here - make offers to free agents, assign scouts, handle team strategy, handle team budgets, etc. Once you’re done with anything you want to have done with your team for the next in-season week, you’ll export your team’s data to the server and I’ll import all changes and merge them into the league file. Then you just need to download the new league file and keep things running.

We’ll sim a week at a time and try to merge updates every other day if possible. If that is too slow or too fast we can always adjust.

Trades will have to be negotiated in real life, not in-game. Once I have teams assigned, you’ll all need to note who runs which team. I’ll be using forum usernames as manager names.

I hope to have this league running tomorrow morning, barring any other last second changes. Once I have it running, everyone participating will learn how to download the initial league file and check in on their team.

We now have a 26-team league. It has two divisions, the Soto Division and the Yelich Division, based on who people would pick the most if they had the 2nd pick in a full dispersal draft.

The top two teams in each division at the end of the regular season will play each other for their division championship. The winners will go on to play in the World Series.

Here are all team assignments: 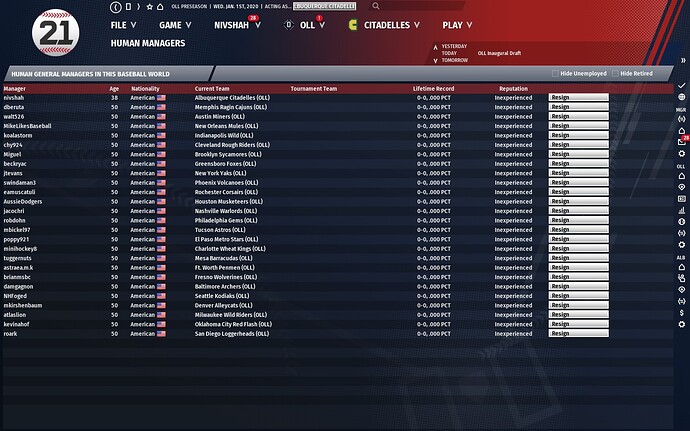 Here is how the teams are aligned: 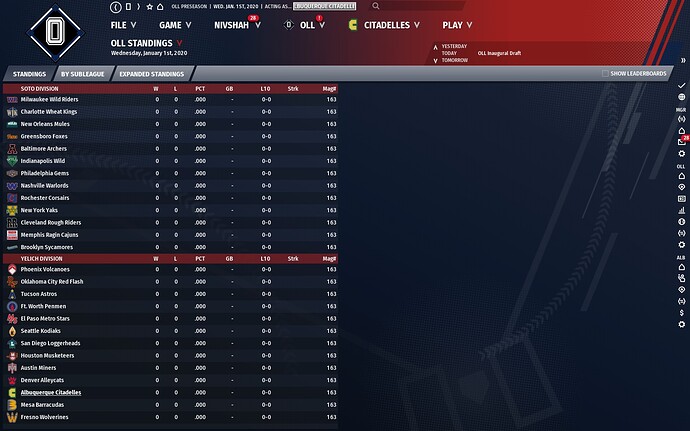 Here is the draft order: 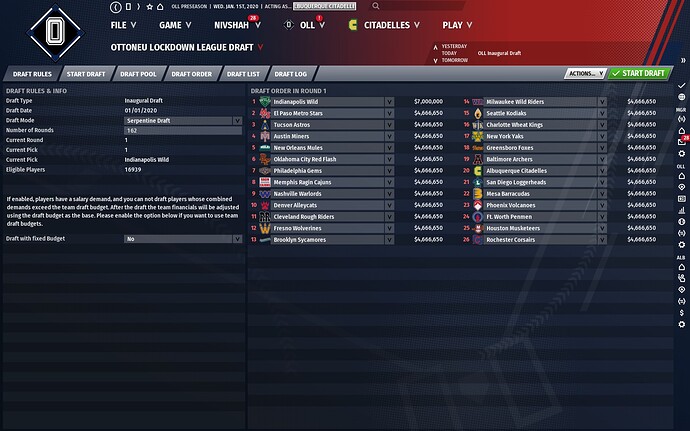 I will simulate the draft later today.

Can we change the team name?

Yes, if you want to change your team name just post in this thread what you would like your new team name to be and I’ll rename it within reason.

I would like to be the Minnesota Hotdish (previously Indianapolis Wild)

You can rename your mascot. We’re going to keep the cities where they are. I’m not sure how changing cities will affect fanbase interest, for example. It may not, but OOTP is pretty deep and it may.

This is excellent, Niv! Thank you for doing this.

My team is now the Albuquerque Isotopes and the logo has been updated accordingly.

Niv – Just wanted to make sure I didn’t miss anything, but we’re waiting on instructions from you for joining the league from within OOTP, download the league file, etc. Is that right?

can I change my team name to the Nashville Nightcaps

Hi Niv. This is awesome! Thank you for setting it up. I would like to change my team name to the Tucson Dust Devils

Denver’s franchise can now be called the Moose. Thanks!

Awesome Niv - can you change San Diego to the Matadors? Thanks!

Team names have been updated. Logos… less so, for now.