Changes to the baseball lineup page

I’ve made some significant changes to the baseball lineup page. The opponent information has been shrunk and moved to underneath player names, and P/G and P/IP have been added to the lineup page for points leagues.

This is much nicer on mobile than before I think, less horizontal scrolling. If you’re in a points league, there is even less scrolling, as I’ve reduced the columns to simply the points rate (P/G or P/IP) and total points.

If you’re seeing something different than the screenshots above, make sure to clear your cache. I’ve tried to do some cache busting on the server side but that doesn’t always work. Please use this thread for feedback about these changes. Thanks!

Coming from a user that always uses laptop and never uses mobile:

I really like the P/G and P/IP columns and the shrunken opponent info, but I vote for keeping the opponent info in a separate column. It may reduce horizontal scrolling but the tables are now twice as high and thus adds a lot of vertical scrolling. I used to be able to see my entire lineup+bench+minors in one screen (ideal for deciding lineup) and now I have to scroll down to see who is on my bench instead of seeing everything at once.

It’s also a bit hard to see the “in lineup” indicator now that it’s scrunched up and hidden within all the other information in the player cell.

Only other minor feedback: P/G and P/IP values should be zero-padded for visual consistency (i.e. a 5.70 shows up as 5.7).

I would vastly prefer a “wide-screen” option (could be done with media queries) that keeps the lineup info on a single line, preferably in columns. Easier to scan, IMHO.

I have a constantly evolving stylish CSS file I apply to Ottoneu. I played around with it this morning and came up with the attached screen.

Could I make a few personal requests for stylish hooks?

Just to clarify item 1 – the P/G and Points columns do not have a class. I was able to right align all the other numbers but those.

Awesome job. I love it already. Thanks for the hard work making it happen. I like the streamlined lineup page as well. Easy, clean, simple. Thank you!

I’ve been using Stylish as well- what did you do to separate the opponent info spans to separate “columns”?

I agree, for people not in points league, all this seemingly did was elongate the columns with the players name and shrink the pitching matchups. This leaves a lot of blank space next to the players names and makes it difficult to read the “in lineup” indicator as well as the pitching matchups for the hitters. I’m almost always on a computer though so maybe its different/easier on mobile

I set a min-width of rems for each span and assigned it inline-block. Works pretty well, though Marwin Gonzalez and his Hou 1B/2B/3B/SS/OF is an annoying exception.

And if Jarrod Saltalamacchia gets on one of my teams, it will break the first column. 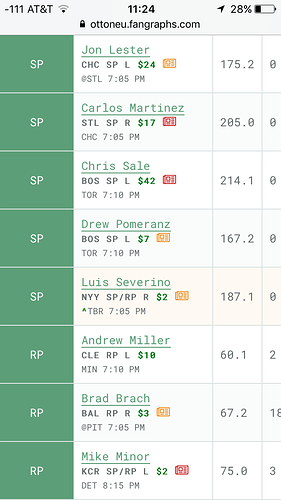 UPDATE Stats should be correct now, for pitchers on mobile.

Can confirm. Would you be willing to make that caret a little larger? Or move it somewhere more prominent with a larger font size (e.g. next to the player name?)

I’d agree with that, what players are starting is the main thing I’m looking for as I scroll through my lineup. I missed the carat not infrequently even before. I would also like it to stand out more, even make it a small icon if possible.

I really like the layout change overall though. Much better on mobile especially.

I’ve broken the opponent back out to its own column on both desktop and mobile. I think I’d like to get back to stacking opponent information underneath the player information, especially on mobile, but I’ll need to think more about how to make the fact that a player is starting stand out more.

This is awesome. Thanks, Niv! In addition to the lineup page, I think this would be a useful addition to the roster organizer particularly with offseason planning right around the corner.

Thanks - that helps for now. I think a different symbol or color that is about text height would work. In any event, in points leagues this is still a good change overall.

Thanks. I may be in the minority, but I like looking at the opponent information. Plus with it being in a smaller font I imagine it would be a bit tougher to click on in a mobile setting if you want to pull up the pitchers page (though I didn’t see the mobile formatting with the new look). Then again I tend to put too much credence into opponent matchups when setting my lineups so maybe that’s not a bad thing haha. Either way thanks for all you do. Love the site

That P/G problem when you run the L/R splits does exist in the current release. P/G makes more sense in general, but if you sort with the L/R splits then the P/G data is simply wrong.

Can you give more information on this please?

The split games are counting every game Bellinger faced either a lefty or a righty. So, it double counts the games when he faces both types of pitchers. Thus, it effectively has the wrong denominator when calculating the P/G.