This was mentioned last year, but when I have the scoring page open the stats still misaligned from before the Points were moved to the left. It happens for any game that has started since the page was refreshed, and is corrected by a page refresh. I’ve even moved to a new browser (from Safari to Firefox). Screenshot below shows that STL/MIA game started since my last refresh and stats are not aligned. 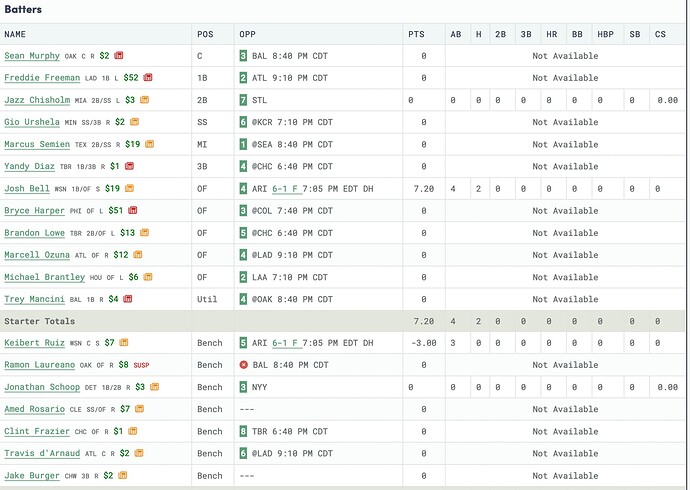 The points column isn’t centered if the game starts while you’re on the page?

Sorry, I could have been more descriptive. The decimal column to the right is the points column, and everything to the left of that is AB to CS just shifted one column left. (Same thing for pitching).

So, AB is in the PTS column, H in the AB column, 2B in the H column…Points in the CS column.

By the way, the same behavior can be reproduced by going to today’s stats and then changing to an opponent’s team in the drop-down. Initially, when you arrive at today’s stats and you are looking at your team, everything is aligned. But, if you change to another team, the points shift to the right and get out of alignment.
Notice how 44 is sitting under AB, but it should be under points. And all other categories are shifted over one slot as well.

Thanks Niv. Looks good. No more thinking my opponent somehow got 18 doubles!

The positioning is fixed, but now the stats don’t appear (though the points do as well as the correct stat totals). CLE/CHW had started before most recent page refresh, ATL/LAD and COL/PHI started since the last refresh. As with before, refreshing the page will correct everything. 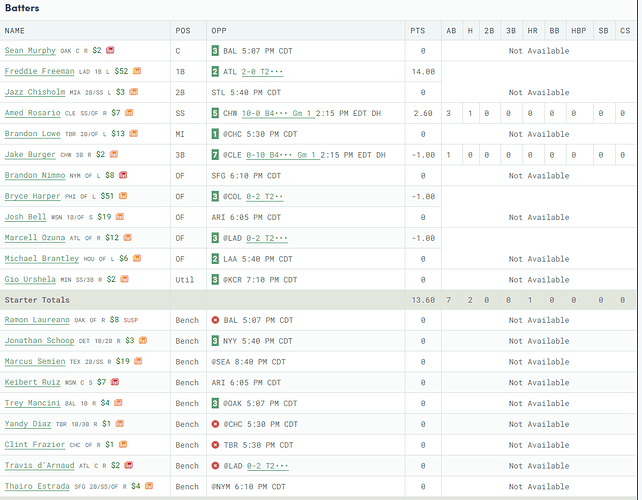 Oh yeah ok, I think this should be fixed now but please let me know if you notice this cropping up again.

We’re close. But now the stats show up in reverse order. Below screenshot shows Murphy, Mancini, Urshela games started since the last refresh. Using Urshela’s line as an example, He is 1 for 2 on the day with a walk. The AB stat is in the CS column, H stat in the SB column, etc. Points are in the correct column. Same issue with pitching stats.

I’ve taken one more blind-ish stab at this. If it doesn’t work I’ll buckle down and try to test some stuff around when games are actually starting.

Looks like whatever you did fixed the batting scores. The pitching still shows stats in reversed order.

I just tested this today. I do not see pitching stats in the wrong order, they seem to be correct.

Well, this is something… two stat lines appearing different. Oh well. Appreciate your efforts on this. It is at worst a minor inconvenience that I can correct with a refresh. 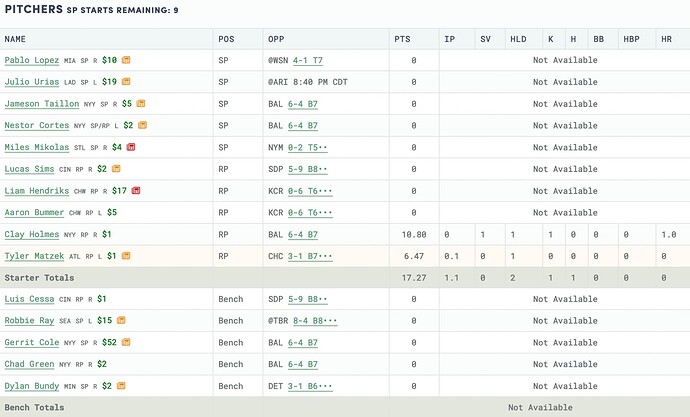 Whoa! That’s awesome. Ok thanks for the screenshot, I’ll see if I can figure that one out.

Just so I’m clear - neither of those guys should have holds yet, right? Their games are not final.

Alright I think I figured out what is going on here and will work on a fix tonight.

Great question on the stats, honestly not sure. Didn’t think to check that before I posted.